If Aamir Khan Did Not Make Taare Zameen Par: A Movie Un-Review 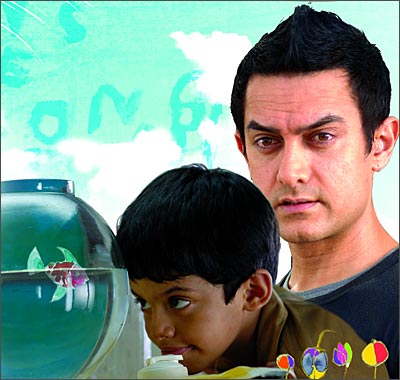 f you want to know how good Taare is, just go to your nearest theater and watch the people coming out after the show. The cacophony that surrounds a crowd exiting a theater will be missing. Some would be walking in slow motion. Some would look petrified. At least that's what happened in the theater I went to. Not a single soul was talking after the movie, probably because what everyone saw on screen was not fiction, but a semi-biography of his/her own life. In fact, the normally rowdiest gang in a theatre (ie my friends and I) that is uber vocal at the end of a film left the theater in pin drop silence. The first thing we said to each other - 'Aamir Bhai has done it again.'

Indeed, Aamir Khan had done it again. I have a gut feeling that Taare would change people like no other movie has previously done.

I know only Aamir can make a film like Taare. But let us assume he did not make it (dream on!). What would the film have been like?

If Karan Johar made Taare

If Sanjay Leela Bhansali made Taare

If Farah Khan made Taare

If Rakesh Roshan made Taare

If Priyadarshan made Taare:

I know there are a lot of other directors, but I choose these guys because I feel they are the most gutless or overrated directors we have today. They keep doing the same shit again and again and more often than not depend on the stars to carry a shitty film forward. They have no courage to try something non-nonsense, something that can use the medium of cinema for a little more than just entertainment, in spite of being the most sought after directors in the country

The reason I am making this comparison at all is to show how Aamir (and Amol Gupte) has made a pure film, without giving into the temptation of masala or 'what would the audience like to see' philosophy; for giving chance to fantastic yet unknown actors like Vipin Sharma and Tisca Chopra (I love Tisca); for riding against the tide; for not trying to hog the limelight in the film by happily playing second fiddle to the boy (even Aamir Khan's name comes after Darsheel Sarfi, the boy, in the credits); for giving the audience something different once again as an entertainer; and for truly caring about the society and using the medium to bring a change.

I remember earlier this year SRK made a statement: 'films are for entertainment; messages are for post offices.' Well Aamir Khan has proved that cinema is probably the best medium for giving a message and I can say that looking at the face of every person in the cinema hall. Not only that, he has proved (yet again!) that a message can be entertaining.

Behold bollywood bigshots, Aamir the director has arrived. With just one film, he has set the bar higher than most of you can only dream of reaching.

this is such a fantastic comparison of the film if it would be made by different directors. first i would like to congrats u for such a good observation u had made.